To sleep, perchance to dream…

What do you dream about?

Lately at the Rubin Museum, we’ve been thinking a lot about dreams. Our 2011 Brainwave series will focus on the intersection of dreams and prophecy, and our fabulous Producer, Tim McHenry, has collected a number of interesting folks to discus the brain and the effects of dreaming.

Tim and I have a bi-weekly meeting where we discuss the goings-on of Programming and Education, and how we can collaborate and support each other. During our last meeting we discussed the logistics of facilitating a dream tour in the galleries and I mentioned a recent dream I had that caused me to not want to wake up.

Some background information: I don’t sleep much during the week.  From 2006-2010, I probably slept 4 hours a night on weekdays. This was not by choice. Sometimes I had too much work to do (this is what happens when you are in Ph.D. school while working full time), and sometimes my mind would just not stop thinking about the day ahead. While my body was able to withstand the lack of sleep, the one thing that I missed out on was dreaming. I don’t recall having vivid of dreams during this time, and I think that I missed out on some amazing experiences. Arianna Huffington has a great TED Talk on the benefits of sleep and I fully believe that we dont get enough quality shut eye.  Luckily, something in my body (most likely age) has switched, and I can generally get a good 5-6 hours in!

The dream I discussed with Tim was one of the most fun dreams Ive ever had in my life. I dreamed that I adopted two kittens and spent the afternoon playing with them. Midway through the afternoon I received an unexpected delivery of two puppies and was overjoyed to play with all of the animals in my apartment.  It was probably the most memorable, happy dream I have ever had (much better than the dream where my arms became snakes and started biting me- that was a high school dream). 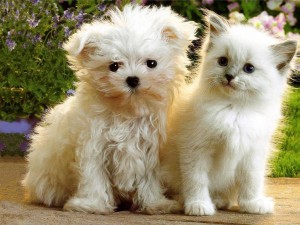 The dream about puppies and kittens romping around my apartment hasn’t immediately changed my life, but I’ve felt compelled to share it. Perhaps the animals have some deeper significance yet not revealed to me, and Im sure some of our Jungian friends who worked with us on the Red Book Exhibition could analyze the heck out of it.

Dreams and visions play a significant part of Himalayan art. The Buddha’s mother dreamed of a white elephant, a prophecy that she would give birth to the Buddha. 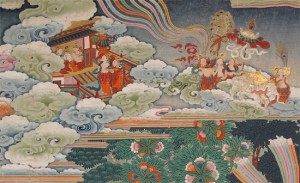 In Jainism, Trishala had sixteen dreams involving multiple visions which were symbols of the greatness of Mahavira. In Hinduism, Vishnu sleeps on a milky ocean, waiting for the dream of the universe to begin.

None of these visions would have happened if people had not been asleep.  I think discussing dreams and art is a fabulous way of connecting with visitors (almost everyone has dreams). One difficult aspect of discussing dreams is that they are often hard to explain to other people, and simple explanations rarely do them justice.  One of the best descriptions of a dream Ive ever read is the short story, In Dreams Begin Responsibilities, by Delmore Schwartz.  The narrator in this story recalls a rather turbulent dream of watching the courtship of his parents on a big screen of a movie theatre.

What is the best poem or story about a dream that you know?  Do you have a favorite painting of a dream? Should I get a puppy and a kitten?