The final Himalayan Heritage Meetup for 2014 was an uplifting event. We were fortunate to welcome Gen Wangdak Taksar La (in Tibetan, “Gen…La” is an honorific for teacher) to the Rubin Museum to share his knowledge of traditional song and dance from Tibet. Wangdak Taksar is a master of Lingdro, a dance form that celebrates King Gesar  an Enlightened King who is the subject of inner-Asia’s longest and most popular epic. 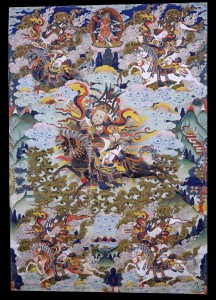 Gen Wangdak La is the holder of this lineage through his family in Tibet, who were well known Gesar dancers, and is the founder of Lingdro Dechen Rolmo, a dance group based in New York City who performs and leads workshops throughout the year. The workshop included a diverse group of Tibetans who regularly participate in the Lingdro dance group as well as newcomers. 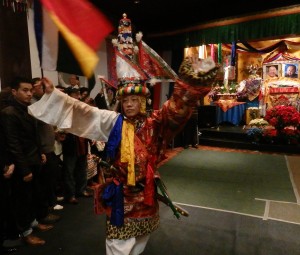 Gen Wangdak La taught a song praising the Buddhas of the five directions (East, South, West, North, and Center), which also correspond to the directions of a mandala.Each verse had a different melody that invokes the enlightened activity embodied by the deities of the five directions. This is said to pacify negative emotions, increase positive circumstances, magnetize auspiciousness, destroy obstacles, and encompass the wisdom of limitless space. 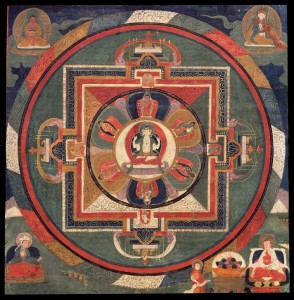 Afterwards, he taught the group the lively and festive dance that accompanies these songs. It is performed in a circle and would have traditionally been performed outside for hundreds of devotees during major festivals and other religious events. It was a pleasure and honor to host Gen Wangdak La at the Rubin Museum. The evening was full of laughter and concentration as we all tried to learn these sometimes-complicated and always beautiful melodies. There were also some very interesting conversations between those who were new to Lingdro dance and Tibetan singing, and those who have been practicing for years. In all, there was a sense of joy around learning this ancient form in such a modern setting. We’re looking forward for Gen Wangdak La to come and teach again! 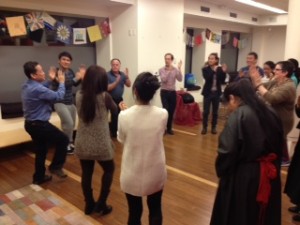 Beginning in February, this event will move the first Wednesday evening of every month, and will continue to be a platform for Himalayan Artists and community leaders to share their knowledge, and encourage dialogue between Himalayan people and friends at the Rubin Museum. For more information, or to get on our mailing list, feel free to email Harry Einhorn heinhorn@rmanyc.org, or Tashi Chodron tchodron@rmanyc.org

This entry was posted in Himalayan Heritage. Bookmark the permalink.