Plateau Engage at the Rubin Museum

This past weekend we welcomed Plateau Engage, a group of Tibetan students at Columbia University, back to the museum to lead the first two sessions of “Beyond the Hero, Villian, and Yeti,” a four-session workshop for Tibetan teens. As we prepared to open Hero, Villian, Yeti: Tibet in Comics last fall, I began talking with Plateau Engage members about ways we could work together to engage the local Tibetan community with the exhibition. After organizing and moderating a panel discussion in December with the exhibition’s curator and a local Tibetan artist, the group was eager to provide an opportunity for young Tibetans to respond directly to the exhibition through art-making. Since the Tibet in Comics exhibition explores the portrayal of Tibet and Tibetans in Western popular imagination, Plateau Engage saw a chance to use it as a starting point from which they could guide young Tibetans in creating their own personal narratives and reimagining some of the Western portrayals.

To apply to be part of this workshop, the teens were asked to write about their favorite fictional character. We started off the workshop by discussing these favorites which included Lady Macbeth, Spock, Holden Caulfield, Jane Eyre, and Batman (“because he doesn’t really have any power, but he can do stuff anyway. And he went to Tibet.”) 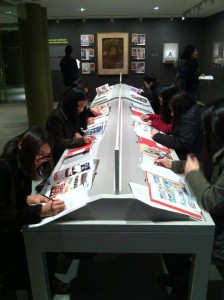 The Plateau Engage team (Tsering, Dickyi, and Muna, creative writing MFA students at Columbia) then looked at selections from many different comics with the teens helping them to examine the comic form and understand how images, words, and symbols work to convey meaning. The group also visited the Tibet in Comics exhibition and spent time reading, sketching, and writing reactions to the comics they found there. Back in the Rubin’s Education Center, Tsering led the group in discussing what types of characters and plotlines they had discovered, and what common themes they saw in how Tibet and Tibetans were portrayed.

After a group brainstorming session about what elements make up “character,” the teens finally began thinking about and sketching a character of their own.  They will continue to work on these characters and create storylines for them when the workshop resumes next weekend at Columbia University. We look forward to seeing their comics! 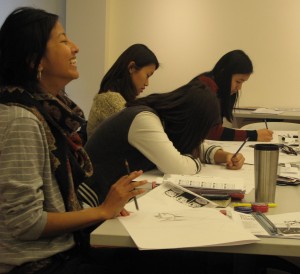 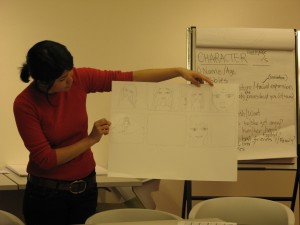