On top of the eight regularly scheduled new audio tours and two major updates to our permanent collection galleries, we’re working hard to complete a Spanish translation of our Gateway to Himalayan Art Audio Tour (look for this in March!). We were really happy to have Mauricio Salgado who works with the amazing organization ASTEP (Artists Striving to End Poverty) and was featured at TEDxYouth@TheSchool in 2011, voice the tour.  As we’ve reported before, we have to produce many of the tours in-house, and this particular session required a few extra monitors for language accuracy and sound consistency (thanks Andrew and Anay!). 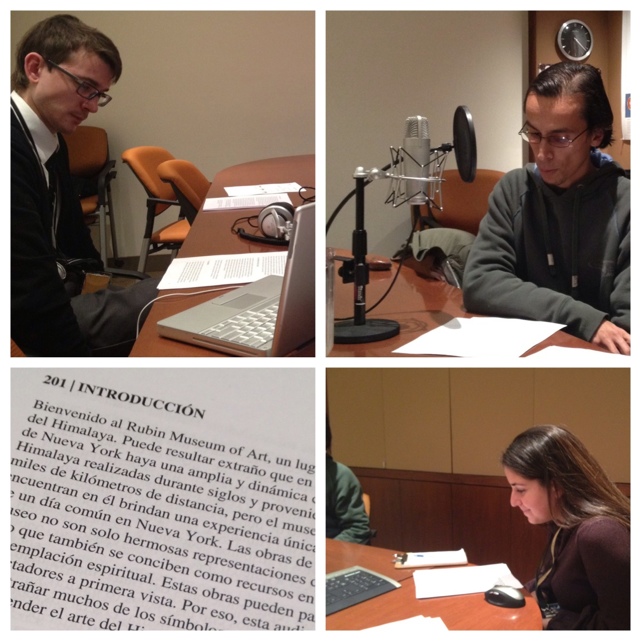 One of the difficulties in producing a foreign language tour in New York City is deciding which language to start with. If you provide a Spanish tour what about the other common audio tour languages: Mandarin, Italian, and French- and for our audiences, why not Tibetan or Nepalese?

I’m of the mindset that you have to start somewhere. Producing a foreign language audio tour requires an incredibly different set of production tasks that were unfamiliar to our normal production team (meaning Andrew and Marcos), and with many Spanish-speaking staff members (including myself), we were able increase the circle of review. Luckily Anay Rodriguez, our Assistant Manager of Visitor Experience, has given many Spanish language tours, so she was incredibly helpful melding and modeling non-common Tibetan/Sanskrit words and general Spanish translation into intelligible sound bites for our voice over artist.

In the end, it’s an incredible access project, and one that I hope will be used by many people inside and outside of our museum- including my grandparents who will be able to download the tour from iTunes in Panama!