I’m writing this, safely, from Bodhgaya, my main location in India, but I’ll start from the beginning:

Time moves differently in India. I’ve been here since the third of  December, I know that much, but already I’m not sure what date is is and I definitely don’t know what day of the week it is. The start of the trip was rocky– a missed connection in London and poor weather meant fourteen hours waiting in Heathrow with two other stranded Americans and a woman from Punjab. Finally, the flight to Delhi the next day dropped me off but not my luggage. Not to worry, they said, we’ll deliver it to your hotel.

Pahar Ganj is a major transit hub in Delhi, where many travelers stay, often in shock, for a few days, before heading out to the rest of the Sub Continent. There you can find not just hotels but statues, spices, vintage sweaters, silks, and whatever else a disoriented westerner might be convinced into buying.

Two days later, my bags arrived, which was fortunate: I’m not only carrying my own stuff, but also a bag of art books to fill out the library of the 17th Karmapa, Orgyen Thrinley Dorje, the highest ranking Lama in Tibetan Buddhism after the Dalai Lama. He will be in Bodhgaya, where I’m eventually headed.

I hop on a train to Varanasi, one of the oldest cities in the world, holy to Buddhists and Mulims, but mostly to Hindus: this is Shiva’s city, location of the Holy Ganga. People come to die in Varanasi: it is believed the a dip in these waters after death will bring moksha,
or liberation. Sadhus, smoking their charas, flock to the banks with inscrutible looks in their eyes.

This is my second time in Varanasi, and it still hits me: the smells, the intensity of colors, the endless people trying to get you into the silk shops (Varanasi is famous for silk)… without giving too much awayI will say somehow I was convinced into buying more than I should have.

When taking a boat down the Ganga one sees a landscape that seems like it hasn’t changed in decades: the ghats, steps leading to the river, each with its own purpose. Each is for a different caste or activity. One sees people bathing, performing prayers, getting married, washing clothes, bringing cattle to drink, and burning corpses, right by the riverside. The most amazing part about that is how ordinary it feels. Every night, High Caste Brahmins pay homage to the River in the Ganga Aarti, a fire ceremony attended by hundreds of tourists and devotees.

Bathing in the Ganges River

I have plans to visit Sarnath, the place where Buddha first taught, and the second most important place for Buddhism after Bodhgaya, but Varanasi keeps sucking me in: the shops, the sights, the people. I’m caught up. Every day feels like three. Every night there are fireworks. My third night there, however, BOOM. Something louder. The owner of the
hotel rushes up to the roof where we’re hanging out and checks to see that we’re there.

“There’s been a bomb. At the Aarti. Many people injured, some dead. Some of them tourists.”

No one knows what really happened. Some say one hundred injured, seven tourists dead. Some say 25. Some say 35. I look out onto the streets– things seem a bit more agitated, but generally the same. I go to sleep. The next day I wake up, expecting a lot of calls from the states… nothing! Apparently, this did not make front page news there. It’s all over the papers in India, however. Final tally: 35 injured. Seven tourists injured. One two year old girl dead. I clear my head and buy my ticket for Bodhgaya– the train leaves the next morning.

Since I have a day before my train leaves I take an auto rickshaw to Sarnath, the place where Buddha first taught. After about an hour on treacherously bumpy roads, I arrive and push my way past crowds of vendors and tourists to get to the main stupa area. There’s a charge to enter (10 Rupees for Indians, 100 for “foreigners”), so the grounds themselves are quiet. Pilgrimage groups from thailand and vietnam are circumnabulating and praying. People take small pieces of gold leaf and rub it onto the structure. Some are lighting candles, some praying, others meditating. 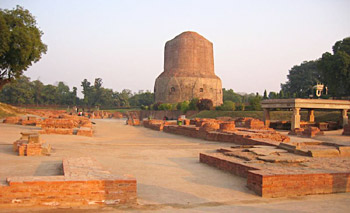 I sit on the damp grass, watch, and think about how I need to be recording this for the museum! Luckily I brought my camera (stay tuned). After about an hour of rest, the park starts to close, and I’m back to the craziness of Varanasi to pack up my stuff and get ready for the train to Bodhgaya the next morning.

4 Responses to First Post From India: Safe, but Overwhelmed