Falling in love with Himalayan Art and Fierce Deities

I first came to the Rubin when it opened, in 2004 as a part-time Guide. I had no background information about the art, I was not an art history major, and I really didnt know what to expect out of being a Guide. I love to learn, and the one expectation I had was that I would probably learn a lot. Guide training began in late August of 2004 and by our opening day, October 2, 2004, I was completely overwhelmed with the amount of information I had to learn.  I was a full-time student and working at the Rubin felt like going to a second school and having another major.

The first piece I was introduced to was a painting of the historical Buddha, which now hangs again in our Gateway to the Himalayan Art exhibit. I was studying, learning and trying to understand and connect with concepts that I had never heard about before. I spent about two consecutive hours on most exhibits, except on the 4th floor, Demonic Divine. I had requested not to be placed there, because the concept of fierce deities overwhelmed me and I had not learned enough to answer any questions on that floor. 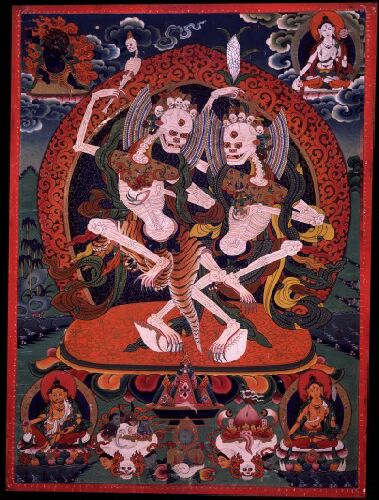 One day, I was scheduled to work in the Demonic Divine exhibit. I felt uncomfortable. I had conflicted feeling and felt I did not have the confidence to speak about the pieces in the exhibition. However, as I began to browse through the exhibit, I saw two skeletons paired together.  They were representing the Day of the Dead and were from Mexico City. These two sculptures were compared to Chitipati, which are charnel ground protectors in Tibetan art. The more time I spent on that floor I discovered details in the pieces that reminded me of Afro-Cuban culture.  Thats when I fell in love with Himalayan art. 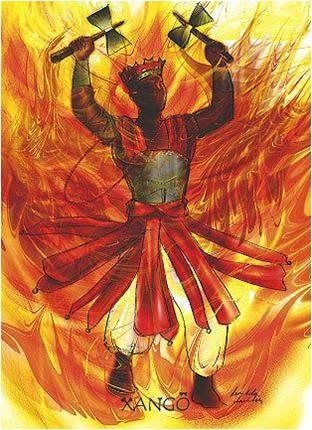 The Demonic Divine became my favorite exhibit, as it brought memories of my childhood and my first experiences in a Bembé (Afro-Cuban drum playing for the Gods). It had been over 12 years since I left Cuba, yet this exhibit brought back the drums playing all night, the colorful costumes, the wrathful Afro-Cuban gods, which I lived in fear of,  and my first dancing experience. Today, as I give tours to ESL students, who sometimes only speak Spanish, also to adults and Latino families, I remember my first experience with Himalayan art. I try to guide an experience where they too could; look deeply, think deeply and feel deeply.