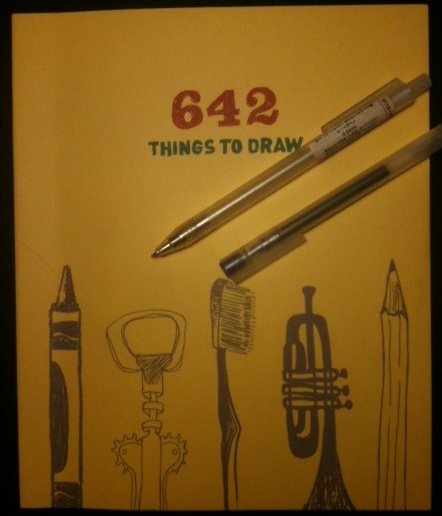 Not to sound like too much like Oprah, but if I could give away one great new book to every visitor to the Rubin Museum this holiday season, it would be 642 Things to Draw published by Chronicle Books.  Auspiciously, I picked up this incredibly portable sketchbook at a gift store while leaving a meeting at the China Institute located on the Upper East Side.  We’re collaborating on a professional development later this winter where RMA Educators will be facilitating an observational sketching session with teachers who will be leaving on a trip to China later in the Spring.

I am a sketch-a-holic. I have to force myself to not doodle/draw/sketch while in meetings or in classes.  People (especially professors) tend to find it a little disconcerting when I sketch them in class or in a meeting, and I have a bad habit of drawing attention when I start illustrating notes.  Drawing helps me to process what I’m thinking, and I generally have to create sketches or diagrams if I want to commit something to memory.  In undergrad I took a number of theatre design courses that encouraged the active illustration of everyday objects to produce renderings for costume or set designs.  Some of the assignments were incredibly literal and I know that it frustrated many people, but I sort of thrived on trying to duplicate 19th century line drawings of stoves or bonnets.  Later though my work in Science Museums I became fascinated with scientific and botanical illustration, and began to annotate all sorts of data. Here’s a picture from a notebook from a Graduate Theatre History class. 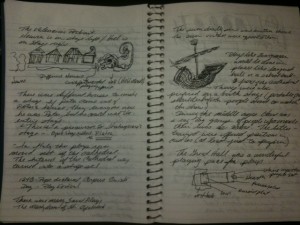 I believe that the drawing helped to make the classes interactive (unfortunately, the professor was not). While I love to sketch and draw all sorts of things, what I often find frightening is the blank page – or starting from scratch. I’ve had little success with blank sketchbooks. I tend to make them into endless scratch pads for last minute to-do lists instead of continuing a practice of sketching, and while NYC provides numerous subjects for sketching, people don’t generally like it when you sketch them on the subway. 642 Things to Draw is a sketchbook that provides open-ended drawing prompts and allots a finite amount of space to complete them in.  I tend to spend 10-15 minutes per sketch, and the prompts really challenge my imagination.  It took me a few moments to think about how to approach drawing a can opener and ottoman, and at times, I felt that I was completing a Sodoku puzzle, trying to make the drawings convey what my imagination was conjuring up.  The more I look at the prompts, the more I realize that there are an infinite amount of ways to approach each one.

Here are a few of my responses to the prompts: Luminescent plankton, a cabin, mushrooms, shrubbery and Bob Marley: 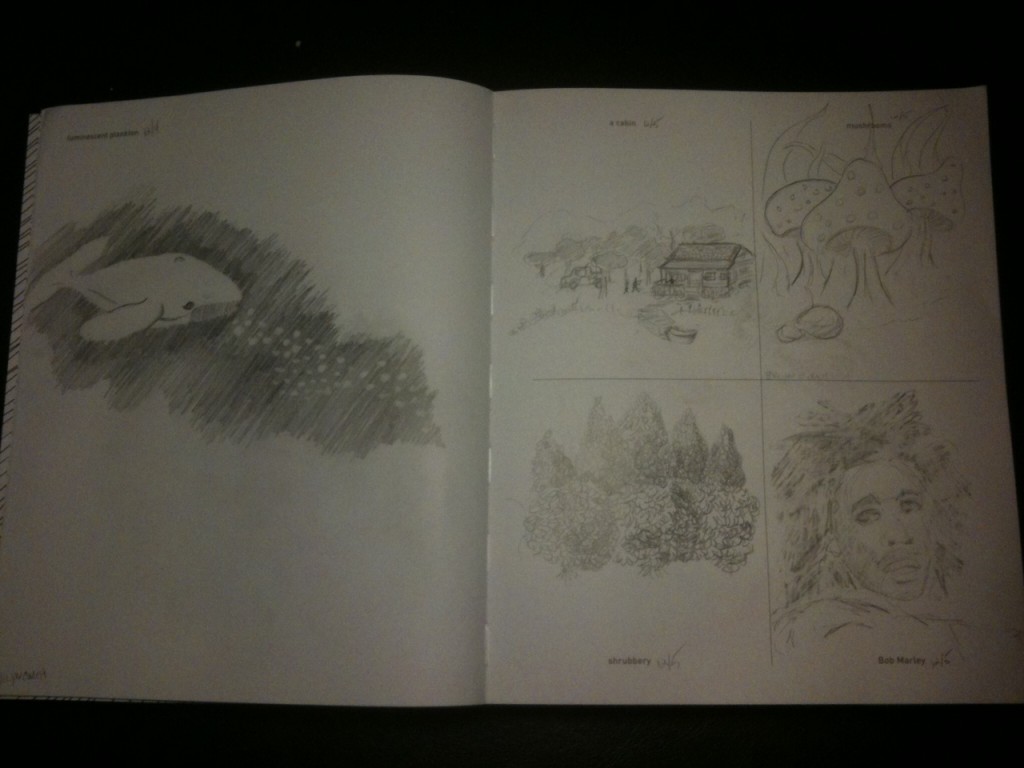 While I was drawing each one of theses, I kept thinking about alternative options I could be drawing. For example, I chose to draw standard shrubbery, but all the while I kept thinking about the shrubbery from Monty Python.  The longer I kept drawing a cabin, the more I kept adding to contextualize the cabin.  Mushrooms made me think of Smurfs (hence the silly shape of the central mushroom).

We use sketching in the galleries a lot, and I’ve been a big proponent of working with both student and adult groups to utilize this activity while in the museum.  We have a pretty open-ended sketchbook, and try to add sketching prompts in a lot of our other activity guides. 642 Things to Draw made me think about how we could share popular prompts to see how people imagine and communicate them.

For fun, here are 8 Rubin Museum of Art Things to Draw:

Meanwhile, I need to get started on the other 625 things to draw…

This entry was posted in Art Making, Uncategorized and tagged 642 Things to Draw, China Institute, drawing, sketching. Bookmark the permalink.