A few weeks ago my colleague Beth Citron and I led a guide and docent session on Modern Art. It was meant to supplement their understanding of our Modernist Art from India exhibition series (the second of three exhibitions, Approaching Abstraction, is on view now). Given that several of the Indian artists in the exhibit came to New York City in the 1960’s on Rockefeller fellowships, Beth and I thought it would be interesting to look at works of art that they might have seen at MoMA during their time here (and we do know that they visited MoMA while they were in New York). Even the process of discovering which artists were on view at MoMA during the time—Marcel Duchamp,  Mark Rothko, Matisse, Arshile Gorky, Picasso, Robert Rauschenberg, Robert Motherwell, Willem de Kooning—as well as a survey exhibition entitled Modern Painting—was incredibly gratifying, given my modern and contemporary art background. 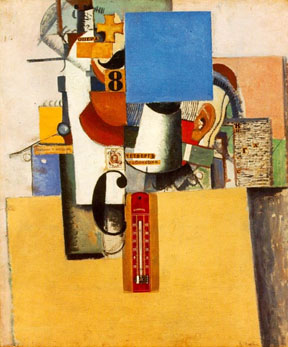 Because we wanted to tap into everyone’s personal experience with Modern art during this training session, as well as discuss their opinions on similarities and differences between those Western artists and the Indian artists in Approaching Abstraction, we imagined that the session would take a more organic, lucid structure. PowerPoint would not encourage such a free-form discussion. Plus, everyone hates a PowerPoint presentation, right? So linear… Instead, I pulled up various examples of the MoMA artists online and pinned them all to a new Pinterest board. 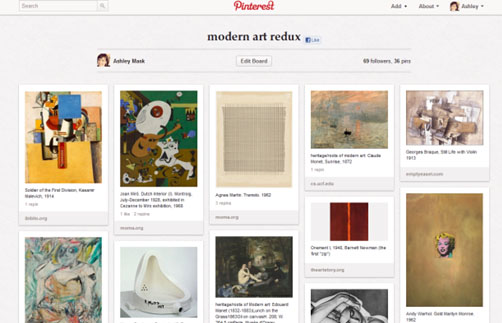 I opened the Pinterest board (entitled “Modern Art Redux”) on the seminar room projector, and we pulled on individual artists and examples of their art as they came up in the conversation. This allowed for a much more responsive exchange between us all. As an experiment in teaching styles and session formats, I found it to be quite successful. While Pinterest may not resonate yet as a tool for academia—you see a lot of craft/recipe/fashion/wedding-planning boards these days—I imagine that this sort of platform, allowing for and encouraging multiple-strands with multiple-connections and multiple-paths, might indeed be the best support for learning in the future.

Our museum also has been experimenting with Pinterest. You can visit the board by going to Pinterest.com/Rubinmuseum

This entry was posted in Education Center and tagged Education. Bookmark the permalink.