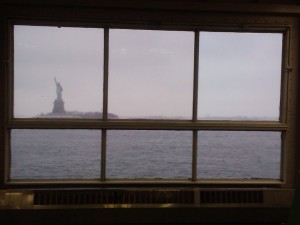 Last Tuesday I traveled from my home in Astoria to P.S. 65 in Staten Island to lead a pre-visit lesson for a group of 1st grade students to help prepare them for their museum visit the following day. That morning was icy, gray, and very cold. As I rode the Staten Island Ferry across the harbor, I took these photographs and found myself thinking of a story. 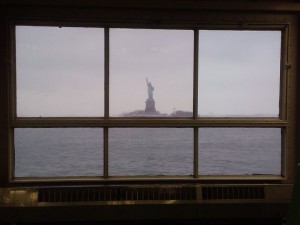 There is a famous Buddhist parable in which the Buddha tells the story of a man who wants to cross a fast-flowing river. There is no bridge or ferry, and the current is too treacherous for swimming. He decides to gather branches, twigs, reeds, and vines, which he lashes together to create a simple raft. He lies down on the raft he has built, and pushes off the shore into the flow of water. By paddling with hands, he slowly makes his way across. 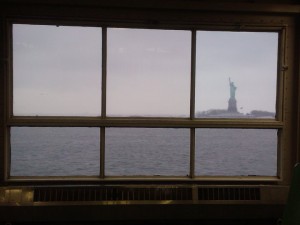 That Buddha then asks what you would think of the man if, when he reached the other shore safely, he chose to carry the raft with him as he continued his journey on land. After all, he worked hard on it, and it served him well in the river. This doesn’t make a lot of sense, does it? The raft has served its purpose, and could only hinder the man as he treks on foot. The Buddha points out that, “so it is with my teachings, which are like a raft, and are for crossing over with – not for seizing hold of.”