Running a museum takes a whole team of professionals whose different skills help make the Rubin Museum of Art one of the premiere places to visit. To get to know us a little more, and to explore different careers in the arts, each month we will be asking a Museum staffer/intern to answer six questions about their position at the Museum, their favorite artworks or exhibitions on display in the museum and other personal attributes. For the twelfth installment of we’re going to be introduced to Shane Murray, Exhibition Preparator and Installation Coordinator. 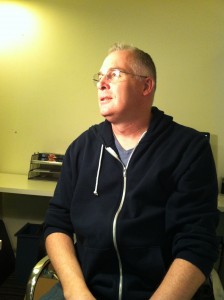 RMA: Tell us a little bit about yourself and what you do at the Rubin Museum.

I am the Exhibition Preparator / Installation Coordinator which means I work with all of the departments of the museum:  Collections, Graphics, Curatorial, Design, Education, Exhibition Planners, Operations, Lighting/AV, Special Events, Security and many others.  I also book and coordinate teams of freelance art installers, mount fabricators, construction crews, painters and exhibition case fabricators.

RMA: Where are you originally from and how did you end up at the Rubin?

I was born and raised in Dublin, Ireland.  I moved to Boston in 1988 in search of something different.  After working as a bartender for couple of years I enrolled at UMass Boston and started taking every art class they had to offer.  To pay my way through college I worked in various jobs – construction, painting, moving, fabricating, art dept. for films.  By the time I graduated, I was immersed in the Boston art scene and was only interested in working in my studio.  But I had bills and loans and making art involves the need to make money.  Eventually I sought a profession in the arts that would allow me the time for my studio practice and would allow me to immerse myself in a constant creative process.  Art installing seemed like a natural fit.   After freelancing at the List Visual Arts Center and the Decordova Museum I moved to NYC in 2000.  In New York I worked at Artex, the Guggenheim and eventually the Rubin Museum.  In March 2004 I worked on a crew that installed the first ever exhibition at the Museum.  The museum construction was behind schedule but the invites for the opening were already sent out, so a temporary show was installed for a one night only event on the first and second floors.  After that event, I continued working freelance mainly at the Guggenheim, some film work and as a freelance installer for almost every show at the RMA.  In Febraury 2008 I joined the full time staff at the Rubin.

RMA: What are some recent, upcoming or current projects you are working on at the Museum?

I have been involved with almost all of the exhibition installations since I joined the full time staff in 2008.   The most recent exhibition we installed was Allegory and Illusion: Early Portrait Photography from South Asia.  Currently we are planning for the installation for the annual rotation of Masterworks on the third floor in January 2014, closely followed by Bodies In Balance: The Art of Tibetan Medicine.  That installation period begins in mid-February and will be opening will be on March 15, 2014.

RMA: Out of all the current exhibitions at the Rubin Museum, which one is your favorite?

Currently my favorite exhibition is Allegory and Illusion. It has a very elegant and clean design.  As the viewer, I am able to enjoy the beauty of the objects.  The exhibition color, the artwork, everything, sits comfortably.   The iPad camera with backdrop is a nice way to goof around in the gallery and take part in the show.

In the past though, I have really enjoyed exhibitions like Visions of the Cosmos: From the Milky Ocean to an Evolving Universe along with Red, Black and Gold and Demonic Divine. 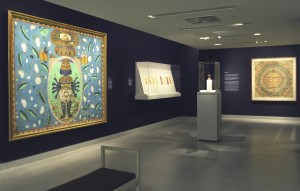 Visions of the Cosmos

RMA: What’s the most interesting or unusual thing you’ve experienced working at the Rubin Museum?

As an art handler, when something of note happens it’s usually not good.  A good day at work means everything went smoothly and nothing out of the ordinary occurred.  The most usual thing I’ve noticed at the Rubin is that nothing of note in the installation process occurs quite a lot.  That’s good.  I prefer to get quiet satisfaction from a smooth operation and let the museum visitors get the thrills and fill in the unusual blanks.

RMA: What advice would you give to someone who wanted to follow the same career path?

If you are an artist and you want to work in the arts, it’s as good a career as any.  The best art installers I’ve met are calm, thoughtful, organized and good leaders.  As an Art Handler/Installer all artwork regardless of value must be handled with the same level of care and respect.  In addition to handling art, the preparators at the Rubin Museum install the exhibition cases, paint and install the blocks and mounts and work closely with the Collections, Design and Curatorial teams to showcase the best that every exhibition has to offer.  As installers we strive for perfection so that the viewer only sees the art and doesn’t necessarily notice all the work that went into putting it on display.

RMA: What do you do when you’re not at the Rubin Museum?

I try to get to my studio in Williamsburg a couple of times a week.  To check out my work over the years you can go to www.cargocollective.com/shanemurray and www.shanemurrayart.com

During the Spring to early Fall I go to Cape Cod as often as possible to fish, sail, cook and relax.

RMA: If you could travel anywhere in the Himalayas where would you go and why?

I’ve never seriously thought about going to the Himalayas.  Maybe one day I’ll throw a dart at a Himalayan map and go there.

This entry was posted in Staff Connections. Bookmark the permalink.