One of our greatest treasures at the Rubin Museum of Art is a collection of stories about the art that we often use during tours.  Stories such as the Hindu tales of how Ganesh got his Elephant Head, the warrior Goddess Durgas defeat of the evil demon Mahisha, and the story of brother Ganesh and Kumara racing around the world for a magic fruit; are truly enchanting and beloved with massive popular appeal by all ages at the museum (including staff) and in Indian Culture.   In Teen Programs, we also share these stories through Amar Chitra Katha Comics, intended for Indian children to help them learn about their home culture.

However charming, these stories uphold stereotypes regarding womens roles and representation, and rarely reflect the views and voice of real women or girls.  Like a cartoon seeking the purpose of entertainment, the stories often glaze over violence or viewpoints that in the real world would be harmful.  Working with teens, I think its very important to look at and be critical of their underlying messages and that theres a lot of interesting ways that this can be related to the impact of stereotypes in media and marketing that students are exposed to on a daily basis.

A great example: the epic and abundant love stories of Shiva and Parvati, the ultimate god/goddess couple. 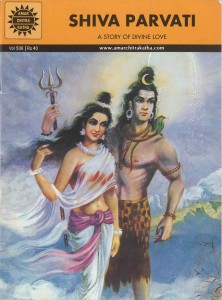 Last week in RMA Teens (rmanyc.org/teens), we discussed a story, in which Sati (another form of Parvati) commits suicide by throwing herself into a ritual sacrifice, as a display of devotion to Shiva after her father speaks ill of him.  When Shiva learns of her death, he goes on a rant, running around the world carrying Satis corpse in mourning in an intense drama that ends with the other Gods intervening by chopping Satis body into pieces to stop the chaos and snap Shiva back to his senses.  Today, you can find temples dedicated to various body parts belonging to the Goddess Sati/Parvati, and at each one you will find a Shiva mask protecting the temple.  Even typing these details out for the blog seems more intense than the fun, dramatic air it has when used in oral storytelling.

When I asked our Teens what they thought about the story, their first reactions were that it was Cute and Romantic in that they were so devoted to each other: both in Satis death and how Shiva reacted so strongly.  It was the week of Halloween, and one student even suggested to our college intern Olivia that she and her boyfriend wear Sati and Shiva costumes for Halloween, as it was also their 5th anniversary.  The conversation turned as we dug deeper.  Students brought up points like Isnt sati the same word thats used when an Indian widow immolates herself on her husbands funeral pyre? 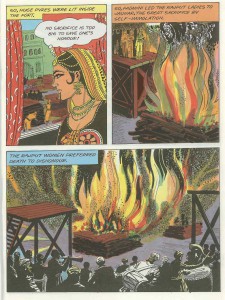 They were annoyed that women are often depicted in the media as acting rash, or exaggerating, as Sati did in the story by throwing herself into the flames overcome with emotion.  We looked at other stories in Amar Chitra Comics: the such as a tale in which Shiva is annoyed with Parvati because she tunes out on a lecture he is providing on yoga.  He declares her too stupid to appreciate an intelligent mate like himself and banishes her to marry a dumb fisherman (also rescuing her at the end of the story). Students also looked at the ways in which the women were visually represented: semi-clad, as temptresses and distractions due to their overwhelming beauty. 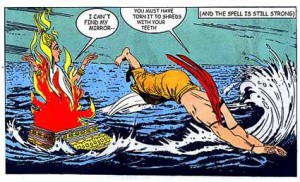 Enter the work of contemporary artist Chitra Ganesh.  In preparation for her visit this week to do an artist lecture and alternative comic book making workshop, students discussed how her work offers alternative versions of Traditional Indian Mythology, offering empowered female representation and a space to address and challenge negative stereotypes.  Ileana Jimenez, a high school teacher at Elisabeth Irwin High School, responded to our invitation to the Chitra Ganesh event by sharing that her students recently attended the SPARK Summit at Hunter College to help launch a movement against the sexualization of girls in the media.

Ive personally been inspired by the work that the Paley Media Center does with students on Fractured Fairy Tales and Portrayals of Women on Television.

What are ways in which you encourage students to look past popular media, advertising or stories to facilitate critical reflection OR what are some great field examples?

Got something you want to share in our upcoming conversation with Chitra?  Please join us!

As Manager of Youth Development at the Rubin Museum of Art, I design, facilitate and teach youth development programs for teens and college students that take place during out-of-school time. At the Rubin Museum, I can combine my huge love for Asian Art and culture with my other favorite thing: working with students!
View all posts by Pauline →
This entry was posted in Teens and tagged Amar Chitra Katha Comics, Chirtra Ganesh, Durga, Parvati, Shiva. Bookmark the permalink.