The discussion questions, responses, and resources that follow are intended to enhance your experience of the exhibition, Gateway to Himalayan Art. The exhibition provides an introduction to the art and sacred traditions of the Himalayan region, and is divided into five thematic sections: The Map; Figures and Symbols; Materials and Techniques; Purpose and Function; and the Tibetan Shrine Room. These sections provide opportunities for you and your students to explore the geography, principal figures, materials, and ritual function of Himalayan art. 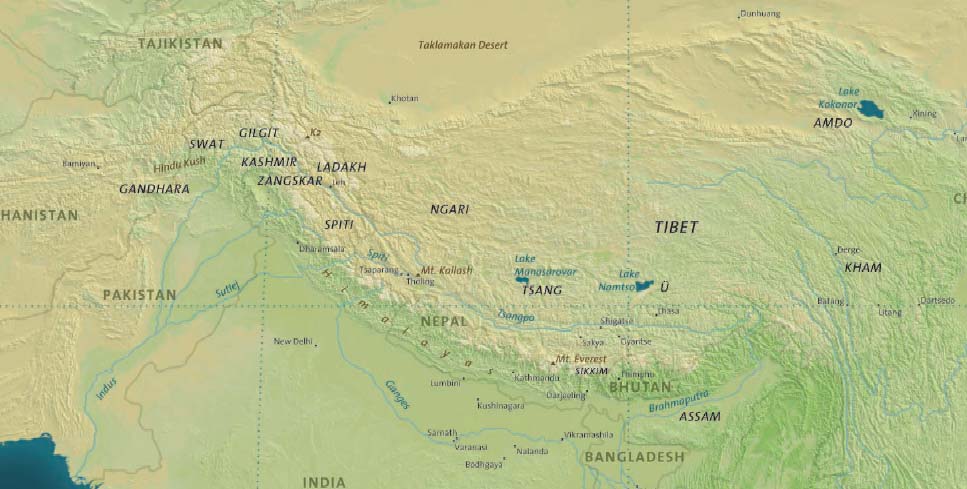 The Himalayan region covers a vast swath of territory over 1600 miles long. Home to the highest mountain in the world, Mt. Everest, this region has experienced tremendous shifts of population, political allegiances and boundaries over the millennia. As information and ideas passed along trade routes, cultures of stunning diversity and complexity developed.

Discussion question: How might the geographical information provided on the map help to explain the cultural diversity and complexity of the Himalayan region?

Discussion response: The towering peaks of the Himalayan mountain range and Tibetan Plateau have thwarted political and economic cohesion in the region but also have created rich pockets of cultural diversity. 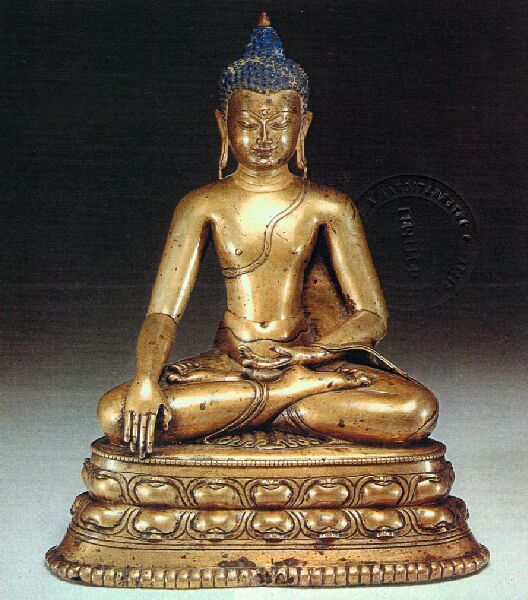 The term buddha, meaning “awakened” or “enlightened,” was first used to refer to Shakyamuni, who lived some time between the sixth and fourth centuries BCE in northern India and whose teachings became the foundation of Buddhism. Shakyamuni became the Buddha by achieving enlightenment, or a complete understanding of the true nature of reality, which freed him from the endless cycle of birth, death, and rebirth. Over time “buddha” came to refer to not only one person but all manifestations of enlightenment. Buddhas are said to possess distinct marks that are often shown in their representations, most notably a cranial protuberance (ushnisha), a tuft of hair between the eyebrows (urna), and long earlobes, and they are usually shown wearing the robes of a monk.

Discussion question: The Buddha Shakyamuni is traditionally depicted with distinctive physical features and gestures that tell the story of his spiritual awakening (enlightenment). Can you identify them?

Bodhisattvas are beings who aspire to attain the awakened state of a Buddha and help others to achieve this state as well. Peaceful and compassionate, they take a vow to end all suffering. Bodhisattvas can be male or female and usually wear crowns, jewelry, and fine garments of Indian royalty. When bodhisattavas assume a female form, they are often referred to as female deities. 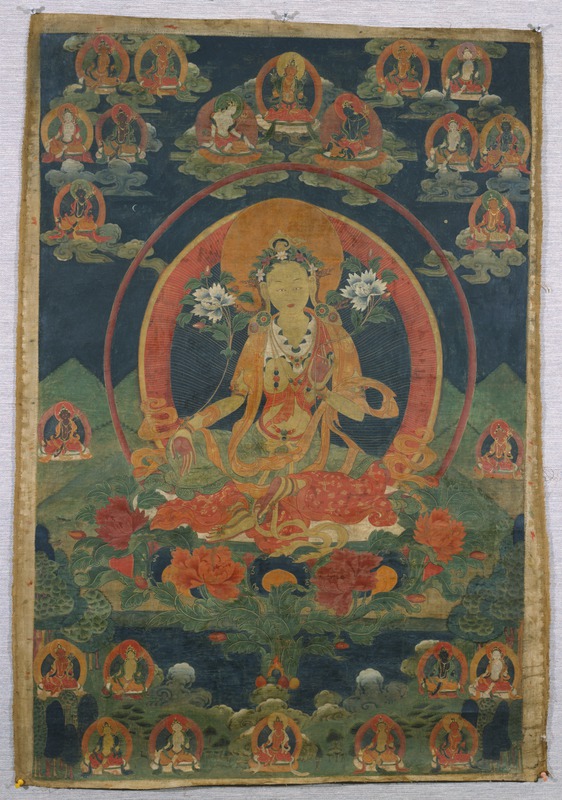 The large central figure in this painting represents Green Tara. Tara is one of the most beloved deities in Himalayan and Central Asian Buddhist traditions. Known as the “savioress,” she protects travelers from danger and provides comfort from fear.  In this painting, Tara sits on a lotus petal throne and is surrounded by lush flowers and plants. In Buddhist iconography, green is the color of growth, vitality, and movement

Tantra is an ancient Indian spiritual system of ritual practices that was incorporated into Tibetan Buddhism. In Tantric Buddhist tradition there exist wrathful deities who appear frightening and demonic but are, in fact, powerful helpers and protectors who assist the practitioner to transform into a Buddha. Tantric deities—the indispensable subjects of Himalayan art—are the focus of esoteric religious practices (tantras) that aim to radically transform conventional understandings of reality. Tantric deities and practices are as diverse as people’s needs and capacities. Female and male deities in embrace represent the unity of wisdom (understanding of reality) and method (compassionate action), two aspects of the enlightened mind. Tantric deities can have multiple heads, arms, and legs, symbolizing their many abilities. 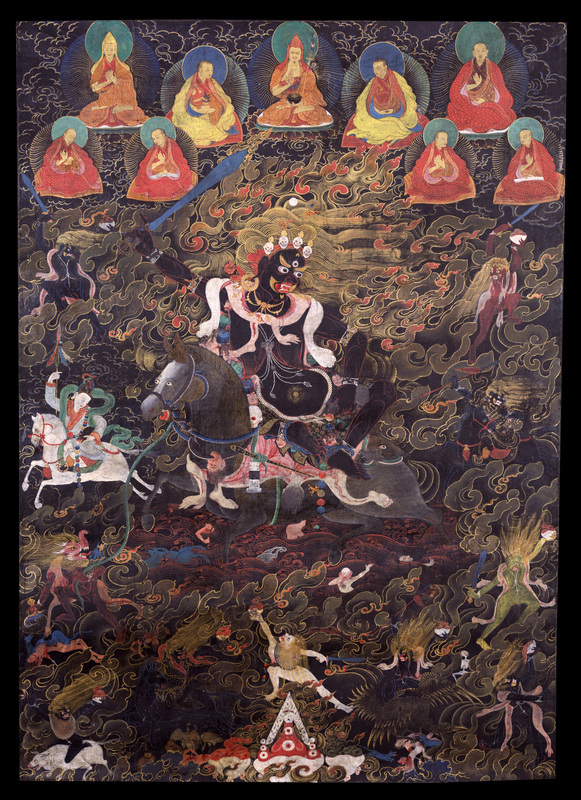 The central figure in this painting is Shri Devi, a wrathful female protector of Tibet. Astride a horse, she is colored black, clutches a sword, and is surrounded by flames. In Buddhist iconography, black symbolizes a fierce, unrelenting determination to accomplish all goals.

Discussion question: Looking at the two paintings of Green Tara and Shri Devi, how might an observer distinguish a bodhisattva from a tantric wrathful deity? Describe differences and similarities between the two paintings.

Discussion response: The plants surrounding Tara, as well as the flowers she holds and her gentle expression, evoke a sense of calm and ease, whereas the flames, smoke, and blackness surrounding Shri Devi create a sense of mystery and power.

This section of the exhibition presents religious art in context.  The installation features religious artifacts as they would be displayed in the domestic shrine of a wealthy Tibetan Buddhist. The objects are from the collection of Alice Kandell, who designed a shrine room in her New York City apartment to closely resemble Tibetan Buddhist shrines she encountered in her travels.  All of the objects—scroll paintings as well as sculptures of buddhas, bodhisattavas, tantric deities, female deities, wrathful deities and teachers—have been arranged on traditional Tibetan furniture and according to the hierarchy they assume in Tibetan Buddhist practices. 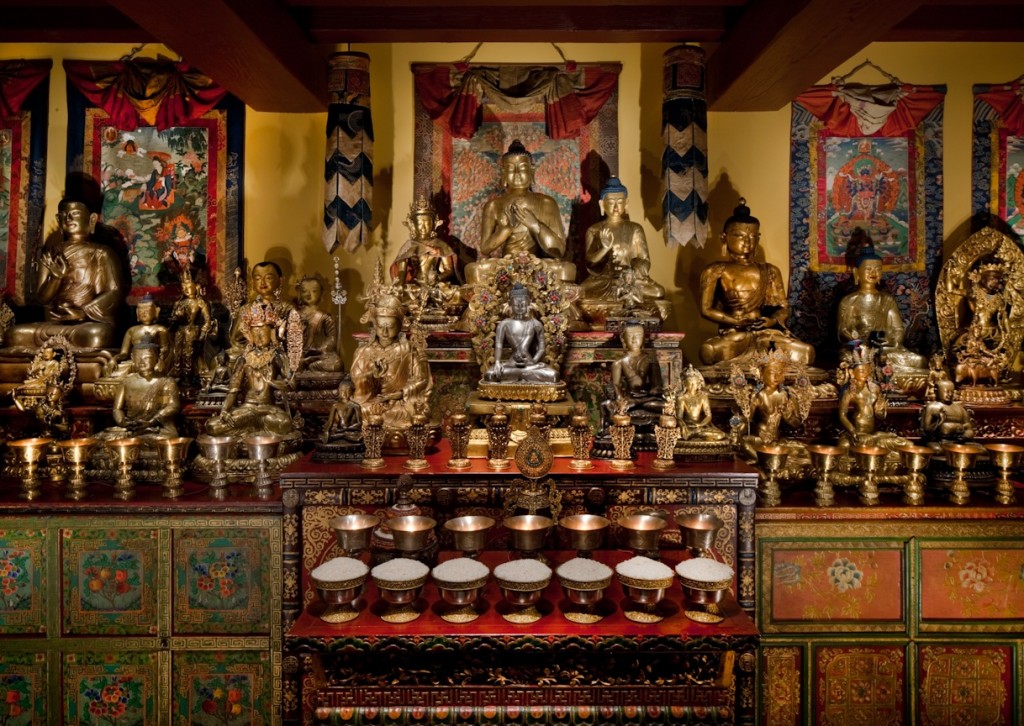 Discussion question: On the central altar there is a sculpture made of silver, about two feet high. Who does it represent? Why would this figure have been placed in the middle of the altar?

Discussion response: This sculpture represents Buddha Shakyamuni in the earth-touching mudra, as seen in the earlier sculpture of the Buddha. Unlike the other sculptures in the shrine, this one was made from silver repoussé (hammered metal) and still retains its handsome base and beautiful flower mandorla background behind the Buddha (for more information, refer to A Shrine for Tibet, p. 71).

www.exploreart.org
Explore Art// Journey behind works of Himalayan art on this interactive site, revealing the stories, ideas and beliefs that inspired them.  The site also lets visitors consider how peoples of other culture have expressed ideas on similar issues through their own artistic traditions.