Explore Ideas of Justice and Art

Are you a John Jay student considering participating in the Rubin Essay Contest? While visiting the Rubin Museum of Art, you might consider researching the artwork and questions below as they relate to various concepts of justice. You are not limited to these works, and we encourage you to investigate others, but they provide a good place to start. If you have questions, roaming Guides in our galleries can help, and there are useful reference books in our bookstore as well. All works can be found on the 2nd floor of the Museum.

To learn more about our collection and specific works of art online, visit our website where you will find museum guides, online interactives, and links to audio guides at iTunesU. Many pieces in the museum have a Himalayan Arts Resources (HAR) number. By visiting The Himalayan Arts Resources Website, and typing in the HAR number, you can download images of artwork and alternative reference materials. Have fun and good luck!

Below are a several images and ideas that will hopefully aid you in your research and writing process. 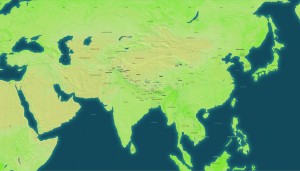 In the Himalayan region, there are a number of disputed border areas between neighboring countries, such Assam (East India), Kashmir (North India), and the Tibet Autonomous Region (South-West China). How does this map visually convey the
complex issue of disputed borders in a way that might be considered fair or just? 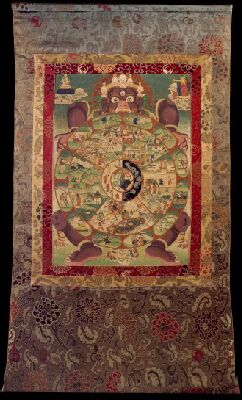 This Tibetan Buddhist Wheel of Existence shows how the life cycle is repeated over many lifetimes until someone becomes spiritually awakened, providing an escape from these cycles. Each quadrant of the wheel shows a realm where a person might be reborn. Looking at the bottom quadrant, the Hell Realm, how does this realm illustrate the idea of retribution and punishment?  Note: You can research this image by using the computer in the Explore Area. 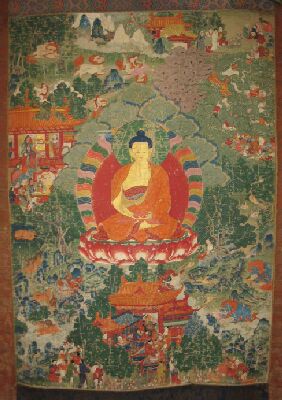 According to Buddhist tradition, before the Buddha became fully enlightened, he lived many lives in the past performing acts of self-sacrifice by taking the form of animals and humans. In the upper left hand corner of this painting a hunter is shooting an arrow at a large, white Snow Lion. Once the Snow Lion is killed, its skin is flayed, providing a warm coat for the hunter. In this example, the Buddha took the form of Snow Lion to help the hunter. How might this generous act of self-sacrifice relate to social justice as we understand it today? 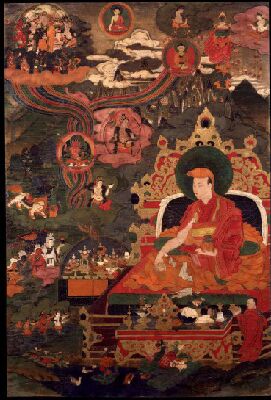 The lama (Buddhist teacher) depicted in this 19th century Tibetan painting is performing rituals to promote long life for all sentient beings (humans & animals) everywhere in the world. How might practicing compassion and the extension of life in the Buddhist context relate to how we view life within the context of our modern-day Criminal Justice system?

This statue portrays a Buddhist bodhisattva. Bodhisattvas are deeply compassionate and take a vow to help all sentient beings become awakened (enlightened) even if it means deferring their own awakening. Looking closely at the surface of this statue, and what it might have once endured, how does the sculpture illustrate justice as it relates to violence and non-violence? 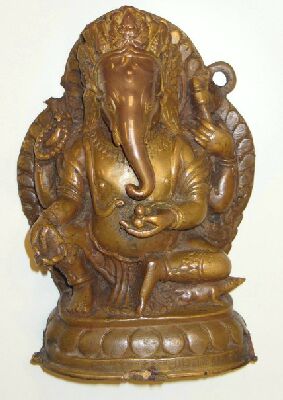 Ganesha is a popular Hindu deity who has a human body and the head of an elephant. Find a gallery Guide and learn about Ganesha’s story, and the way he acquired his elephant’s head. How might his transformation from a human being to a hybrid deity illustrate the relationship between gods and humans? Was what happened to Ganesha fair or just?

This entry was posted in University Audiences. Bookmark the permalink.