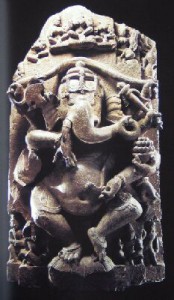 Ganesha in the Rubin Museum's Cafe

Everyone loves Ganesha, a college student murmured during a tour of the Rubin Museum of Art one afternoon. We were gazing at the 11th century Hindu statue of Ganesha in the alcove off the RMA café. Many heads nodded in agreement.

Along with my new job at the Rubin Museum helping to guide the University Programs and Partnership initiative, I teach a course for the Religious Studies Program at Eugene Lang College. Originally, I hadnt planned to include Ganesha in my tour. An elephant-headed Hindu deity didnt fit neatly within the theme of the course, a comparison of Tibetan Buddhist and Eastern Orthodox Christian sacred art, but something told me to start with Ganesh, the Hindu deity of auspicious beginnings, the remover of obstacles, who reputedly served as scribe for the Mahabharata by dipping one of his sharpened tusks into an inkwell and scribbling the text. 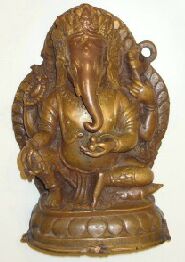 A Smaller Ganesha Statue on the Rubin Museum's 3rd Floor

My students were delighted to discover that family dysfunction gave rise to Ganeshas hybrid form, and they marveled at the artistry of the Indian sculptor who had transformed a chunk of sandstone into undulating, fleshy forms. They were intrigued by offerings left by visitors in Ganeshas honor: coins, small flowers, and notes tucked around his ample girth.

Later, many students commented that Ganesha was one of their favorite pieces at the museum, as many RMA docents, guides and educators working with visitors have discovered. Ganesha is hard to forget. 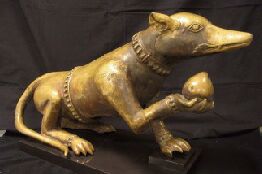 Then an idea took hold: why not create a university study guide dedicated to the most compelling works of art at the Rubin Museum, those unforgettable pieces that knock our collective socks off?

With future inspiration for university students in mind, what is your favorite work of art at the museum? What makes it unforgettable?