How to Use This Educator Resource

Throughout India, the use of figuration in art has been a long and continuous tradition. After independence this notion of the body and human figure became connected with the creation of a new cultural identity as well as social and political concerns facing the new nation.  The exhibition, The Body Unbound features works of Indian art from the early 1940s to the mid-1980s, ranging from traditionalist representations of Indian villagers and townspeople to representations of the metaphysical “man” to the socially and politically charged narrative representations that predominated in the 1980s.

The contents of this Educator Resource are designed to be used by educators and students and can be adapted to suit the needs of a wide range of classrooms. Included are three key images from the exhibition. The guiding questions provided with each image are intended to draw attention to details in each painting and to the broad themes of the exhibition. It is always helpful to begin looking at each work of art with some basic, open-ended questions that will elicit observations and questions.

We encourage you to use this guide in any way that works best for you: 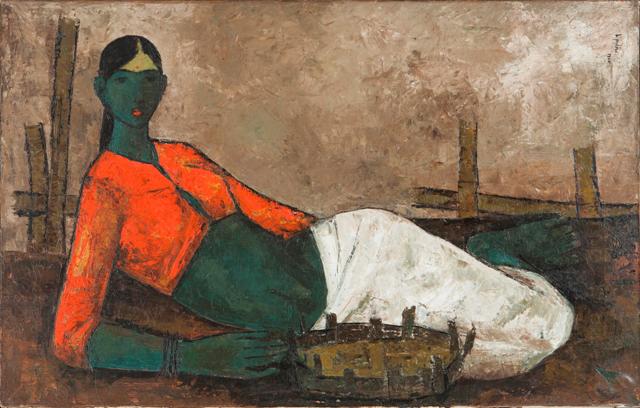 This frontal, reclining portrait of a fisherwoman recalls a pose often seen in representations of odalisque figures in historical European paintings. However, within the context of Indian modernist painting, Fisherwoman presents several striking, experimental contradictions: she is sexualized, feminine, and mostly delicate, though her traditionally lower-caste work is shown through her large, muscular hand next to her basket. The unusual perspective of this representation can be attributed to the female gender of both the subject and the artist, as there were relatively few professional female artists in this period.

Professional female artists like B. Prabha were quite unusual in the Modern Indian art world of the 1960’s. With the introduction of various social and professional spaces for women, female artists found a sanctuary of expression and began to transcend issues of gender, all while developing the modern feminist identity in India. 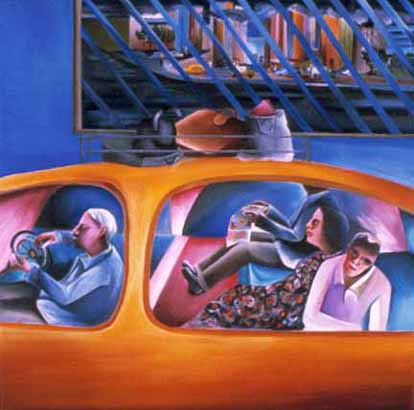 In the mid 1970’s many Indian artists began to change the way that they worked with the human form. While previous work represented individual figures, artists began to use narrative forms placing the figure of the human body within a surrounding environment.  One artist who began this innovation was Bhupen Khakhar.

Khakhar was born into a middle-class Bombay family in 1934, and later obtained a degree in economics, becoming a chartered accountant by the 1950’s. Khakhar’s interest in art grew and he attended the M.S. University of Baroda to study art criticism. He maintained his job as an accountant while painting during his free time. Through his art Khakhar sought to introduce India’s true middle class into his painting welcoming narrative scenes of everyday life into his practice. His work often depicted his own middle-class profession, including accountants at work, as well as the profession of barbers which was traditionally a low caste in India.

If you look carefully at the four figures in this painting, you’ll notice one figure reading what appears to be a tourist guide of New York and another wearing an exaggerated floral pattern garment that completely covers her body. The figure in the front seat looks quite similar to the artist, and he’s driving a car with the steering wheel on the wrong side of the road for driving in the United States. Khakhar extends his humor into the painting by placing the mismatched luggage of the passengers on top of the taxi, a common place to store one’s luggage in Indian taxis but not often seen in New York. The luggage itself is not common for a transcontinental journey, and the bags seem to be normal shopping bags which can often be seen on a daily commuter train in India. Attempting irony, Khakhar’s piece is meant to represent a person’s first day in a strange new place, unprepared for the new experience. 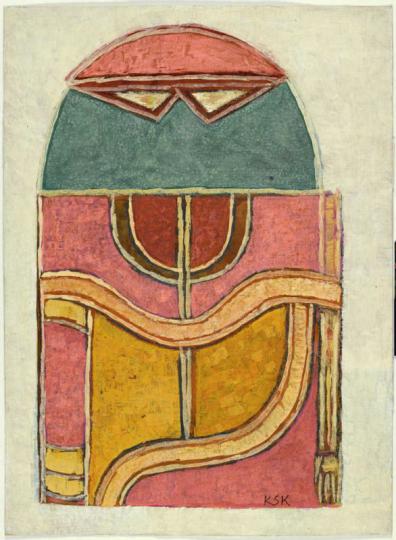 K. S. Kulkarni was a founder-member of the leading Delhi Shilpi Chakra artist group established in 1948. With a single figure against an abstracted background, Deity reflects one of the predominant trends in modernist Indian art after Independence. Though the figure is geometric, flattened, and semi-abstract, it is rendered as if it were an icon, especially through its large size relative to the ground of the paper. The vertical trishula,or trident, along the figure’s left side would identify it with the Hindu god Shiva, though it lacks other definitive attributes and maintains a resolutely secular modernist aesthetic function.

Deity– the state of being divine; god or goddess

Figure– form or shape of an object, as determined by exterior surfaces.

Iconography– symbolic representation and conventional meanings attached to an image.

Modernism– a philosophical divergence from the past in the arts and literature occurring especially in the course of the 20th century.

Secular-worldly attributes or characteristics that are not regarded as religious, spiritual, or sacred.

Setting– the locale or period in which the action of a novel, play, film, or art work takes place.

Caste- any social class or system based on cultural distinctions like heredity, rank, wealth, or profession.

Trishula- a type of Indian trident, or a three prong spear, commonly used as a Hindu-Buddhist religious symbol.

Shiva- one of the three chief divinities of Hinduism, the two others being Brahma and Vishnu. Siva is also the god presiding over personal destinies.

School Programs: Rubin Museum of Art
www.rmanyc.org/schoolprograms
Browse and learn about the different programs the museum has to offer for students K–12.