Mirror of the Buddha: Early Portraits from Tibet

How to Use This Educator Resource

In early Tibetan painted portraits, founding masters of important Buddhist schools were often represented as holy personages and exalted to the level of buddhas. The exhibitionMirror of the Buddha showcases some of these early portraits. Identification of these figures is complicated and often requires analysis of written inscriptions and lineages. This exhibition presents particular figures within the different schools of Tibetan Buddhism. We recommend visiting www.rmanyc.org/mirrorofthebuddha and downloading the “Schools of Tibetan Buddhism” as an additional resource to this guide.

The contents of this Educator Resource are designed to be used by educators and students and can be adapted to suit the needs of a wide range of classrooms. Included are three key images from the exhibition. The guiding questions provided with each image are intended to draw attention to details in each painting and to the broad themes of the exhibition. It is always helpful to begin looking at each work of art with some basic, open-ended questions that will elicit observations and questions.

We encourage you to use this guide in any way that works best for you: 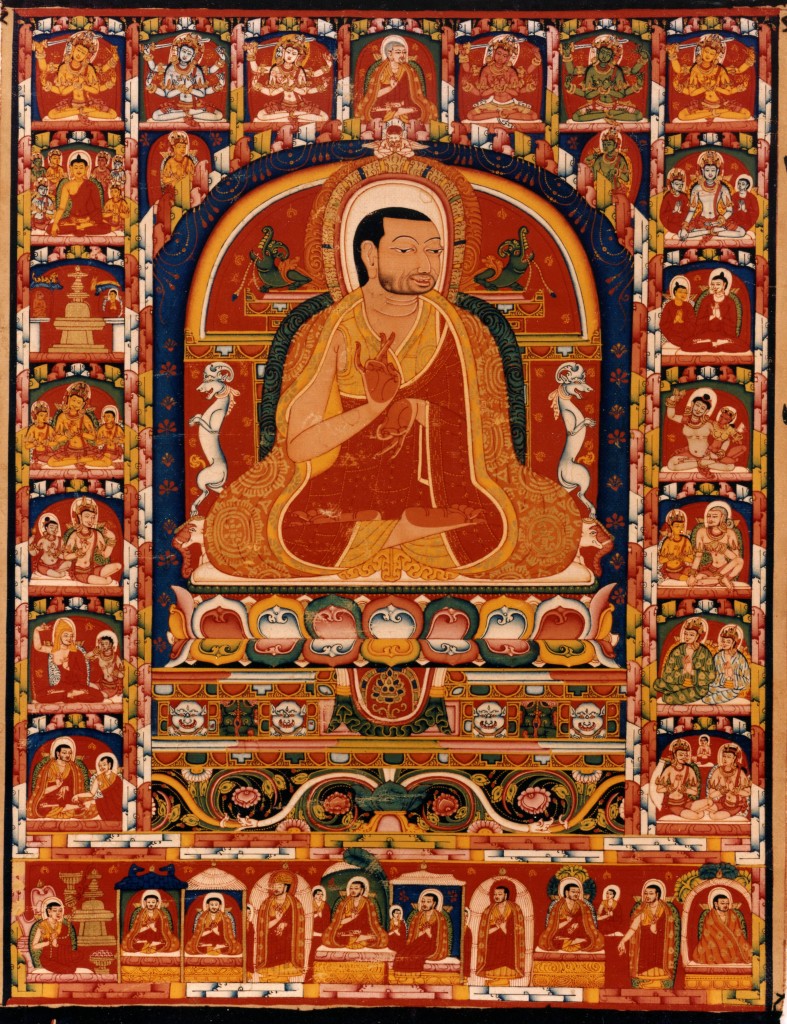 Phagmotrupa with His Previous Lives and Episodes from His Career

This painting is a perfect example (and prototype) of standard early portraits of Phagmotrupa within the Taklung Kagyu School. It depicts Phagmotrupa surrounded by minor figures, including tantric deities in the top register, and scenes of his previous lives in the right and left columns. While several later copies of this prototype survive, early versions of this portrait, such as this, are rare.

The original upon which this painting was based was presumably commissioned by one of Phagmotrupa’s disciples either in the last twelve years of the teacher’s life or in the decade or two following his death. The prototype was probably made early in the lifetime of the Taklung School founder, Taklungthangpa, who was an intimate disciple of Phagmotrupa. Taklungthangpa was told privately by Phagmotrupa the stories of his previous lives that are depicted in the columns of this painting. 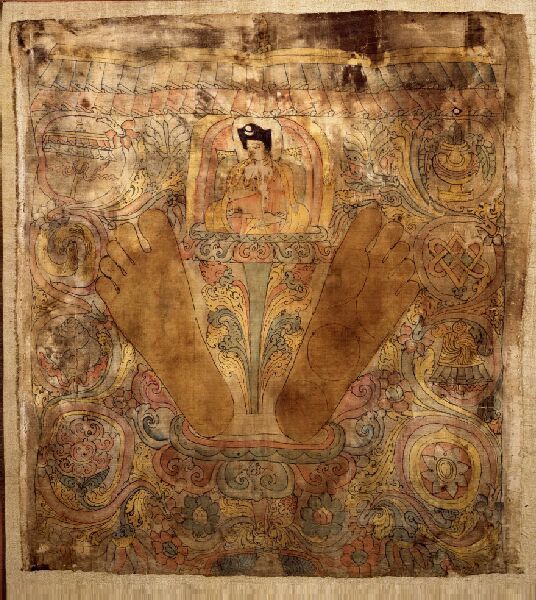 This votive painting belongs to the Karma Kagyu School, judging by the special black hat that its main figure wears. It exemplifies the simplest and probably earliest-known painting of a founding master of that school, or Karmapa. It pays homage to the black-hatted master shown above the footprints, who is presumably the First Karmapa, Dusum Khyenpa (1110–1193).

The painting was simply executed with thin washes of color on silk, so it lacks most of the expected features of a fully colored painting. Still it exemplifies devotional paintings of the late twelfth century, based again on worship of the lama’s footprints.

The painting also pays respect to the master by depicting him under a broad parasol and surrounded by auspicious objects placed within the undulating vine that grows from below. The parasol is an ancient Indian Buddhist iconographic element of depictions of the Buddha and a way of auspiciously paying homage. 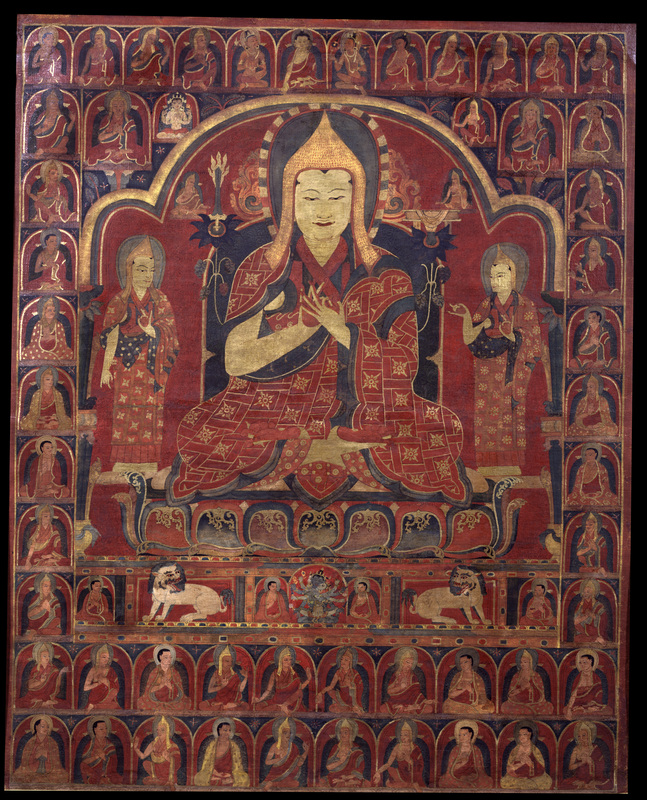 This painting portrays the great teacher Tsongkhapa, wearing his usual pointed yellow hat, with his two main Kadam lineages. The painting may date to the mid-fifteenth century, within a generation or two of its subject’s life.

It includes such traditional stylistic elements as Nepalese scrollwork, which beautifies the dark-blue backrests of smaller figures. The simple three-lobed arch over the main figure and his two disciples, however, evokes a Sharri (an ancient eastern Indian–inspired aesthetic) atmosphere. The prominent head nimbus of the main figure, depicted as an ancient halolike feature, is borrowed from the early Kadam tradition, artistic confirmation that Tsongkhapa was the founder of the “New Kadam Order,” one of the names for the Gelug School.

buddha – a title given to one who has attained spiritual awakening (enlightenment) in the Buddhist tradition.  The term “the Buddha” often refers to Buddha Shakyamuni, (also known as Siddartha Gautanna), who lived from approximately 563–483 bce.

Buddhism – a religion and a philosophy that is based on the teachings of Buddha Shakyamuni. The Buddhist tradition focuses on the attainment of enlightenment and nirvana and the release from an endless cycle of death and rebirth.

Eight Auspicious Symbols – a group of symbols often found in Buddhist art, representing a range of abstract concepts. These significant symbols are the doublefish, parasol, conch shell, lotus blossom, banner of victory, vase of sacred water, wheel of life/teaching, and knot of eternity.

idealized – a conception of something that is perfect, especially that which one seeks to attain.

lama – the Tibetan word for teacher.

Karmapa – the Head of the Kagyu School of Buddhism through the Karma Kagyu lineage and often respected as a living buddha.

lineage – a line of descendants of a particular family, school, or religion.

School Programs: Rubin Museum of Art
www.rmanyc.org/schoolprograms
Browse and learn about the different programs the museum has to offer for students K–12.

Explore Art
www.exploreart.org
Journey behind works of Himalayan art on this interactive site, revealing the stories, ideas, and beliefs that inspired them. The site also lets visitors consider how peoples of other culture have expressed ideas on similar issues through their own artistic traditions.