What Do American Indian and Himalayan Art Museums Have in Common?

For their latest Educator Meetup, the Rubin Museum’s Education team headed all the way down town to the National Museum of the American Indian (NMAI). While it might seem like a museum devoted to the historical and contemporary material culture of American Indians and a museum dedicated to mainly Hindu and Buddhist art from Himalayan Asia would have very little in common, the Rubin educators were pleasantly surprised to find that the two institutions actually had many parallels. 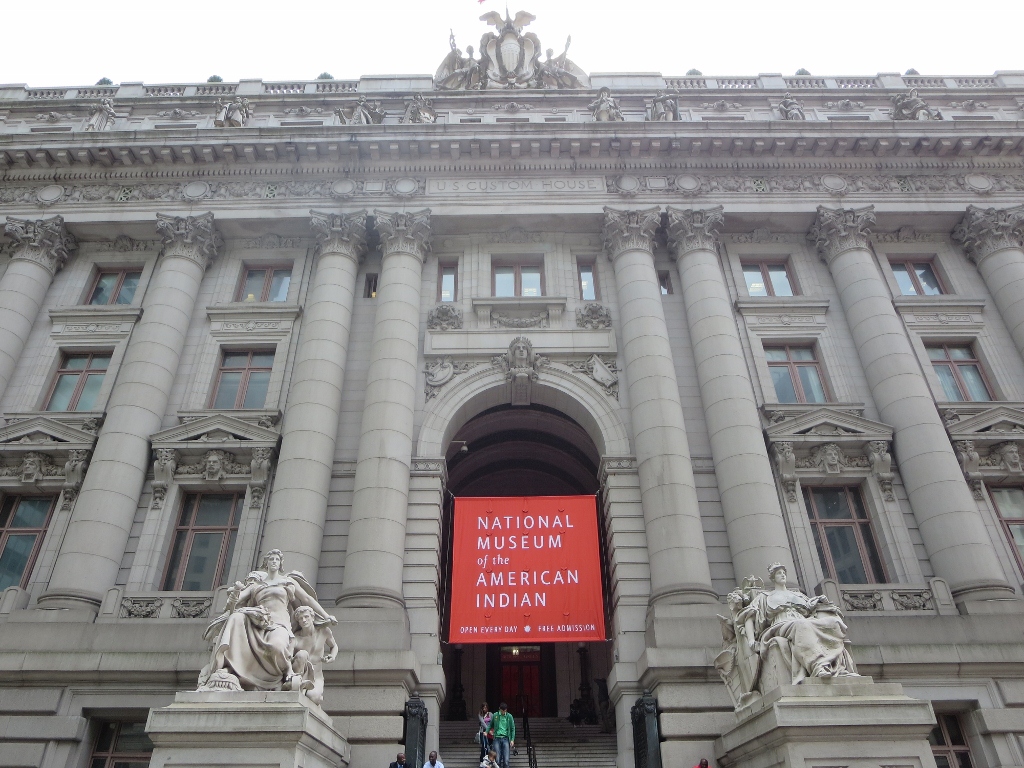 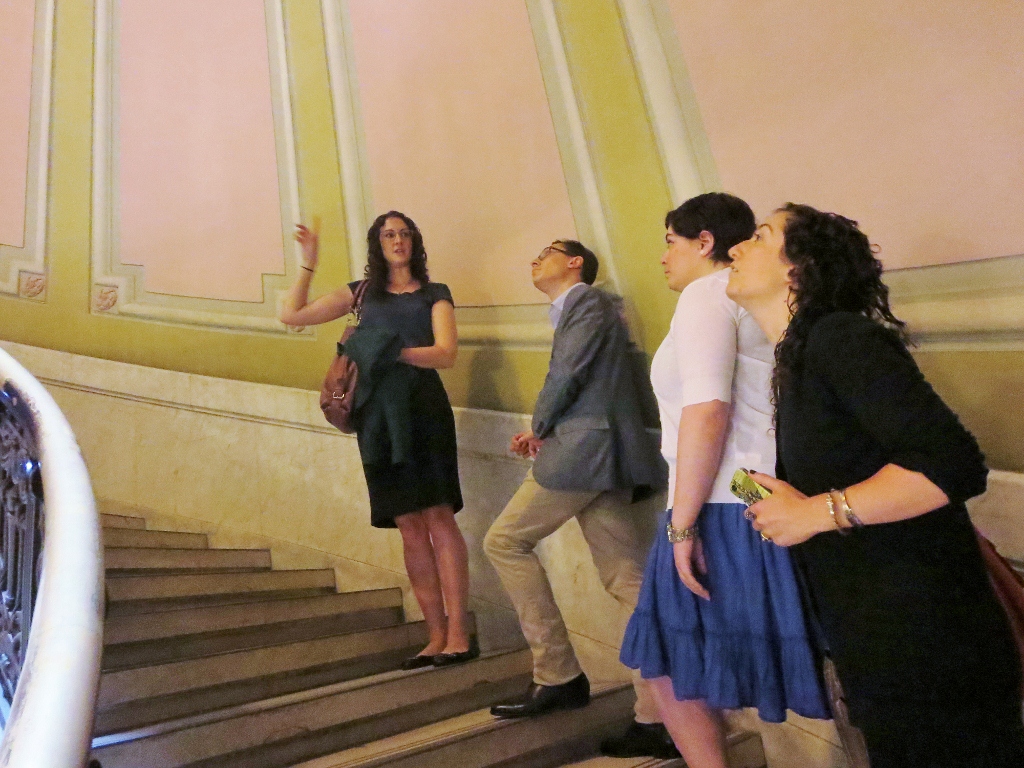 The Rubin Educators first took a tour of NMAI’s relatively new, encyclopedic exhibition Infinity of Nations. The tour was prefaced by a brief visualization activity where the Rubin team members were asked to imagine an American Indian Chief and to paint a mental picture of him, from his clothing and accouterments to the environment in which he existed. Then, as a the group entered the first section of the exhibition, they were confronted by a series of ten headdresses from different Native Peoples around the Western Hemisphere. When asked if anyone saw something similar to what they had imagined, no one had an affirmative answer. This activity was the first step in understanding how strong our stereotypes are, even if we don’t think that we hold them, and how those stereotypes influence the way that we experience exhibitions. 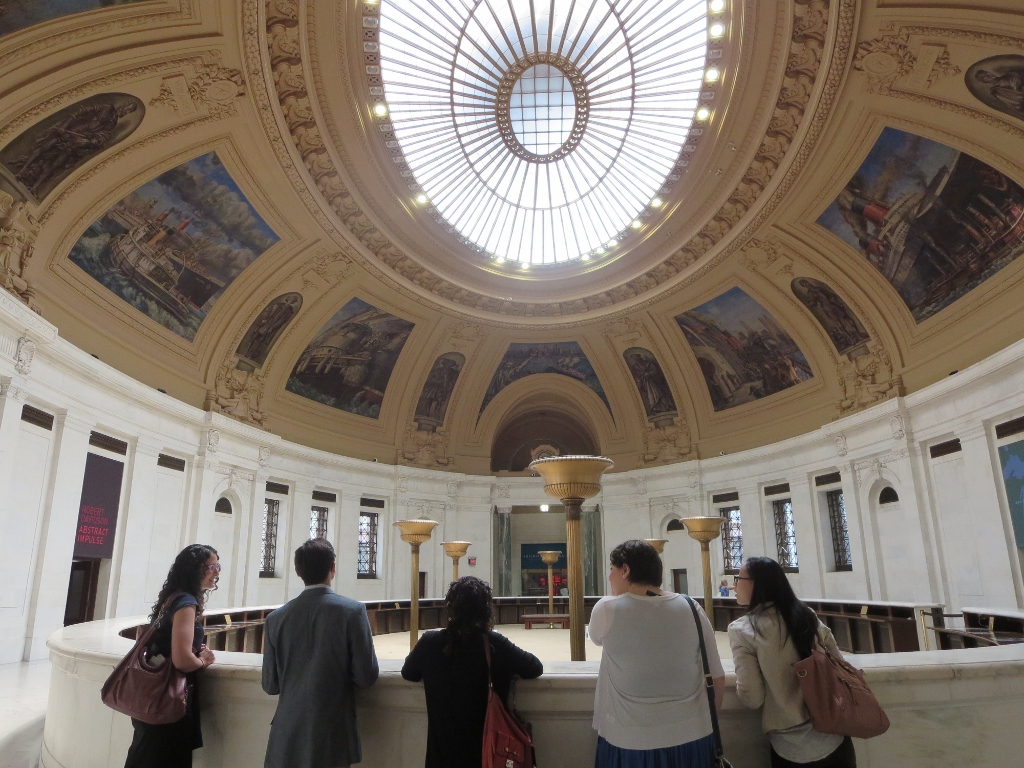 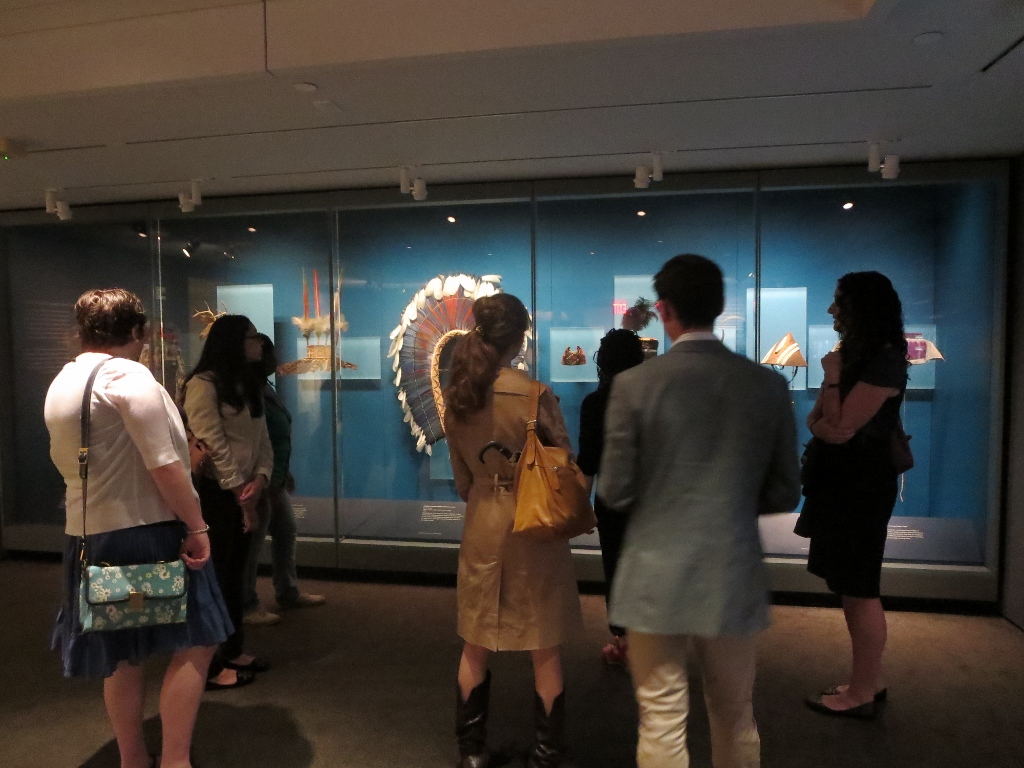 After a whirlwind tour of the immense exhibition that left the whole group wishing there was more time, we proceeded to the museum’s Education Center. More colloquially known as the “Tipi Room,” the Education Center is an interactive exhibit that focuses on the culture of the peoples of the Great Plains of central North America. Here we were met by two of the museum’s Cultural Interpreters as well as the Manager of Education. First, Cultural Interpreter William Chimborazo led the group in an experience/discussion about his goals when working K-12 students, specifically when telling the Christopher Columbus story, which is one of the most requested topics for the NMAI interpreters. William stresses the fact that, when telling the history of Columbus, semantics are very important. The commonly used language is that Christoper Columbus “discovered” America, but in reality, America was not his to discover. He got lost during his journey to the West Indies and stumbled upon what is currently the Dominican Republic, a place that was already populated by the Taino people. 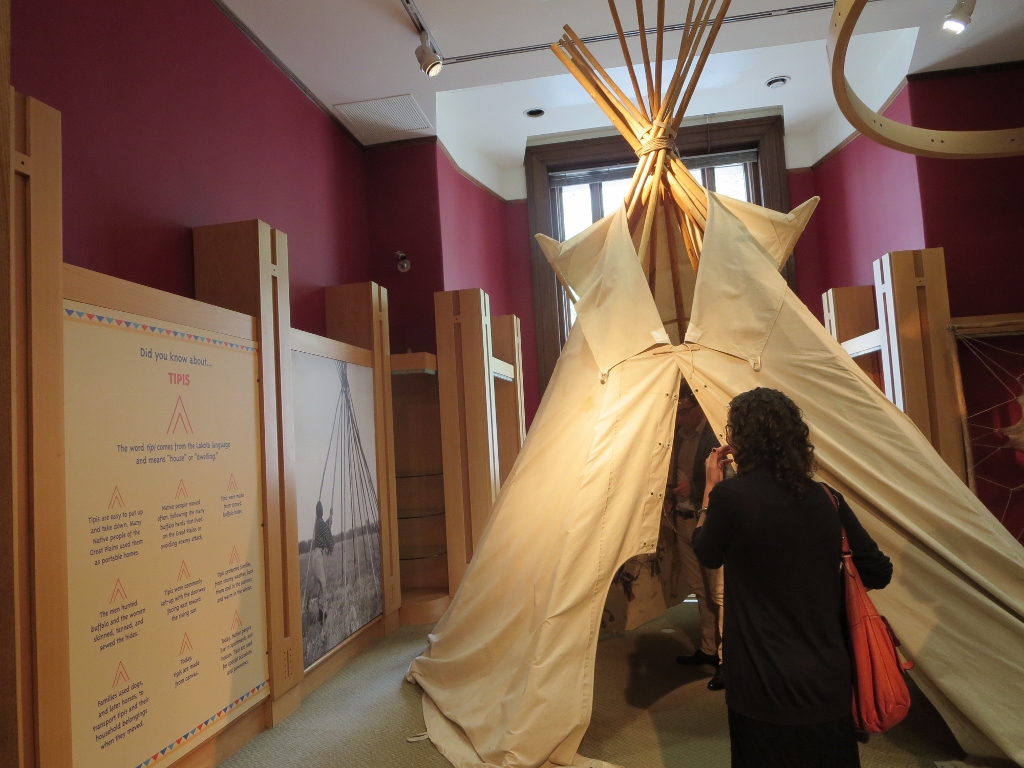 William continued to stress the importance of not forming or enforcing stereotypes such as “All Indians lived a long time ago” or “All Indians live in tipis” because there are, in fact, over 500 distinct Native American tribes in North America alone, each with its own culture, history, and language. So when asking questions like, “What kinds of houses do American Indians live in?” the answer is always “different.” Visitors to the Rubin Museum also come laden with stereotypes about Buddhists, China, Tibet, and other cultures within the Himalayan region. The guides agreed that they must all work to find the best ways to gently dispel these stereotypes in a sensitive and skillful way.

To end the field trip, we opened up the floor to the Rubin Educators so that they could have a chance to voice their thoughts about the similarities between their institution and NMAI and to begin a discussion about the challenges we both face and how we deal with them. One interesting topic that came up was the importance of cultural sensitivity. In both museums, there are educators who belong to the culture about which they are teaching, but more commonly, neither the educators nor the students belong to that culture. At the Rubin, we often incorporate the concept of Mindfulness into our teaching. While other museums like NMAI might not use that term, they often talk about sensitivity, neutrality, or cultural relativism when discussing the cultures of various American Indians.

Another question that came up dealt with the issue of working in a museum that holds a very specific political position (in both cases, one of neutrality) and how educators have to set aside their own opinions in order to uphold the position of the museum. Every educator at the Rubin has been confronted with questions about Tibet and whether or not the museum supports Tibet in any way. It is important for all educators to understand that the Rubin, as a public institution, remains neutral on the subject, just like NMAI must remain neutral on issues regarding the Indigenous populations of North and South America. The Manager of Education, Dr. Johanna Gorelick, was able to speak directly about the position of NMAI as a Smithsonian Museum and a branch of the US Government, and about the importance of all of the museum’s staff knowing how to talk about tricky political issues.

The last part of the discussion focused on the missions of the two institutions and whether or not a separate Education Mission should be added. The Mission of the Rubin is as follows:

The Rubin Museum of Art is a dynamic environment that stimulates learning, promotes understanding, and inspires personal connections to the ideas, cultures, and art of Himalayan Asia.

Although we currently do not have a separate mission statement for the Department of Education and Engagement, the staff that was present for this discussion largely agreed that the part of the mission where the guides can really excel and have the most rewarding experiences is in helping visitors to create personal connections to the art in the museum.

The NMAI mission has many parallels with that of the Rubin, with one major difference. NMAI stresses the importance of cultivating partnerships with the Indigenous peoples of the Western Hemisphere:

The National Museum of the American Indian (NMAI) is committed to advancing knowledge and understanding of the Native cultures of the Western Hemisphere—past, present, and future—through partnership with Native people and others. The museum works to support the continuance of culture, traditional values, and transitions in contemporary Native life.

Another aspect that is conspicuously not included in the Rubin’s mission is the inclusion of contemporary life in Himalayan Asia, and the group also discussed this fact and how they address contemporary concepts during their tours and programs.

Everyone agreed that this was very engaging and very heavy meetup that address many tricky issues. Stay tuned for July’s meetup, which just might be a little more lighthearted.