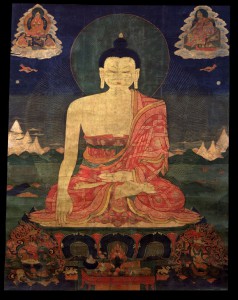 Shakyamuni Buddha, currently on display in Gateway to Himalayan Art

This semester in Thinking Through Art we explored students personal narratives structured around the idea of past, present, and future. Nearly 300 students created scroll paintings depicting scenes from their lives. One of the most interesting aspects of the project for me was seeing the students plans for the future. The high school students plans ranged from goals to graduate from high school or drive a car to more elaborate plans such as, I want to do research on Saturn or, I want to be a dentist in Paris. There were many future doctors, lawyers, chefs, and professional sports players amongst us. From the elementary school classrooms we discovered a lot of future teachers, firemen, police officers, doctors and singers/pop stars. Some students found it difficult to articulate their plans for the future, while others were excited to share their plans with us.

As David mentioned in his recent post, Thresholds, the end of the year is, for many, a time to pause and reflect on the time that has passed and make plans for the future. Viewing these student projects has initiated some interesting office conversations about what plans we had for the future when we were younger, and how those plans changed. Unrealized career goals in the education department include a paleontologist, an architect, a plant shop keeper, and a cartographer. Im curious to hear from others: What did you think your future would hold when you were young? How has it differed? And if you work in a museum today, what led you to this career path, rather than another?

5 Responses to past, present, future