Going there with VTS

I recently attended a Visual Thinking Strategies Professional Development Institute (Level 1) in September. The methodology is well-known by its acronym, VTS, and I entered the institute with some pretty strong preconceived notions about VTS (or at least modified VTS, as I have seen it used frequently in museums across the country). My prejudice was not negative or positive, per se. Rather, I felt convinced even before the institute began that while I would learn a great deal about the methodology, ultimately, our application at the Rubin would be limited. After all, I work in a museum with a permanent collection consisting primarily of Hindu and Buddhist religious artworks. For those of you who know something about VTS, you may understand my reservation. VTS is great for facilitating an open-ended exploration of artwork, but when it comes to content, it cant deliver. At some point, youve got to tell people something about what the artwork means, right? At least, thats what I thought.

Alas, here I am on the other side of several months for self-reflection and gallery experimentation. I am astonished at how well VTS works, even in a museum filled with CONTENT (aka: art-making, art historical, religious, sociological, cultural, geographical, you name it, weve got it). Ill use a recent example to illustrate my point:

Our College and Teen Programs Coordinator, Pauline Noyes, asked me to demonstrate VTS with a group of four college interns. Fabulous folks, these four. We talked briefly about what they could expect from the session, then we headed to the gallery floors to view works in The Nepalese Legacy in Tibetan Painting exhibition. Our first artwork was an image of Maitreya, or a future Buddha. I didnt tell the interns this, of course; after all, this was VTS. Instead, we took a few moments to look then I asked them VTS question #1: What is going on in this picture? A rich and wonderful conversation ensued, with so many perspectives and co-created observations and insights shared. I stayed in the role of facilitator, with paraphrasing and VTS questions #2 and #3. I marveled at all of the details that were brought to my attention. The group discussed the shape of the lines, the meditative gestures of the figures, and the calm expression on the central figures face. We moved into discussing the structure of the painting itself and the geometric, orderly composition (each figure in its own box). The colors became particularly important during the conversation, as each person commented in varying ways on the brilliant yellow of the central figures halo, or nimbus, and the way it seemed to emanate from the figure, fading to a mustard gold as it extended away from the center. 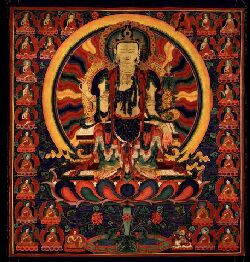 The second artwork was also a thankga painting, but in this case, we were looking at a wrathful image of Mahakala, the Great Black One. Again, this is VTS, so I was not asking directed questions or inviting the interns to make comparisons between this painting and the last one. Of course, as the facilitator, I selected the artwork we viewed, which is an important aspect of VTS. I had a feeling this group would naturally compare and contrast on their own. And they did! There was a lot of discomfort around this painting, but interestingly, it was less about the wrathful nature of the deity (skulls abound, teeth are exposed, nostrils flare, a human figure is being crushed, etc.), but more so about the composition. Here, the neat and orderly grid was all out of whack, and the colors seemed muted and muddy. The interns discussed their feeling of disorientation within the space, unsure of where the figures stood and what environment surrounded them. Their intuition guided them. Without an ounce of content, we really got to the heart of both of these artworks. 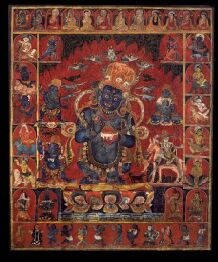 The Great Black One from Nepalese Legacy exhibit

The following Saturday, I was out and about in Prospect Park, on my weekly sojourn to the farmers market. It was a brilliant fall day, and the colors around me were bold and vibrating. As I looked across a field, I spotted a glowing yellow tree. The first thing that popped into my head was the glowing yellow/gold color around the central Maitreya figure in the first painting we discussed the previous day. It was as if this tree was emanating light from its trunk, and out from the trunk, the color was bright and light and almost hard to look at straight on. As the leaves stretched outward, the color darkened to a mustard color, just like the dulling color in the nimbus in the painting! Its these kinds of moments that make me believe Im turning sentimental, but come on! This is the stuff that makes it all worth it! To sum it up, I am pretty thrilled about all of this. VTS is providing a method for discovering layers of meaning and significance in artworks that is deeply enriched by co-learning, with other people involved in the process. And the biggest takeaway for me, as a museum educator at the Rubin Museum of Art? Intuition goes a long way, even in a content-rich museum collection.

3 Responses to Going there with VTS