If you visited the Rubin Museum on a Wednesday evening in April you may have seen an eager group of visitors exploring artwork together, then focused in deep concentration over their notebooks, writing responses to individual pieces.  This group was participating in an Adult Writing Workshop at the Rubin Museum which consists of multiple small-group sessions led by experienced writer-instructors from the fields of fiction and non-fiction writing. Participants in the April 2013 Adult Writing Workshop explored the exhibition Modernist Art from India: Radical Terrain, the final exhibition of a three-part series Modernist Art from India that examines art from post-independence India. Their activities included individual writing exercises, group feedback, and repeat artwork visitation in the galleries to provide consistent inspiration and encouragement for novice and veteran writers alike.

Guided by their facilitator, Nina Goss, each participant explored a painting from Radical Terrain and through both group and individual reflection created a written response.  Nina earned a PhD and MFA at the University of Washington in Seattle and teaches creative writing at Fordham’s College at Sixty Program.  In her capable hands the group created some amazing pieces of writing.

Here is an excerpt from the writing of participant Terence who was inspired by the artwork Untitled by Satish Gujral: 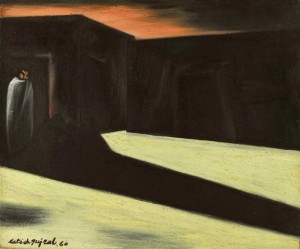 Excerpt from “The Story of Yin and Yang”

The light was excruciating. It had ripped her shadow asunder. It almost did the same to her. But the Shadow Reaver was obsessed. Could not let her prey go so easily. When that door burst open and he went through, she had to follow. She had made a mad rush for it pulling her screaming shadow behind her. Then all was pain—a thousand thousand burning needles being stuck into every inch of her being. It was agonizing in a way she had never known. The warmth, the light had seared off her armory skin. When the light finally dissipated, she lay in the void gathering strength. Waiting. It didn’t matter how long.

Suspended there, she had visions of her enemy in some blinding world. The brush that the Reaver’s shadow had suffered with the enemy’s shadow had formed some connection between them. Though her shadow was no more, the connection remained. In one of her final visions, she saw something that evoked insidious joy within her—a child and its shadow.

At the end of the Workshop participants left feeling inspired and ready to write!