A Visit to Jogyesa Buddhist Temple in Seoul, South Korea 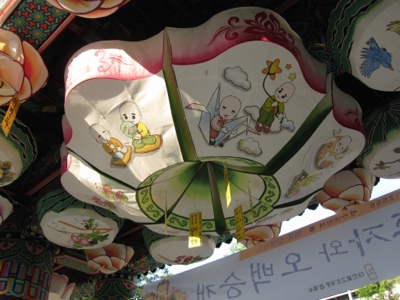 I get slightly jealous of participants in our programs because they get to have so much fun. Once in a while I get to go out and have fun too, and while traveling through Korea and Japan this summer to visit the World Expo (blog post on Expo 2012 coming soon), I thought I’d report on my own Transformative Trek to Jogyesa, Korea’s large urban Buddhist Temple.

This summer our Teen Art Lab students were busy documenting the Himalayas in New York. If you haven’t checked out the Teen Blog with all of their fascinating adventures, be sure to look it up on rmateens.tumblr.com. When our teens go out into the city, they’re not always looking for explicit Himalayan ART sites, but places and things that help them to expand their knowledge of the ideas that the Rubin Museum encompasses. While Korean Buddhism and East Asian art differ greatly from my daily work at the museum, my experience in East Asia is helping me contextualize the history of a part of the world that I was introduced to after most of my formal schooling was over.

A few years ago I traveled all around China and happened upon Tibetan Buddhist art everywhere (there were even fabulous pieces in the Forbidden City in Beijing). Seoul is very different. While there are numerous palaces to explore throughout the city- they are mainly large structures without temples or shrines inside of them. Buddhism played a major part in Korean history, and there are many Buddhist masterpieces on display at the National Museum, however the traces of Buddhism or Buddhist art in the major downtown area were centrally located at Jogyesa, a large open air shrine and public space for the Jogyesa Order. 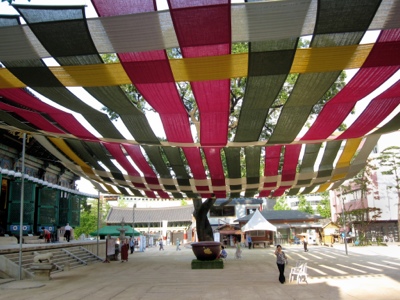 After visiting three gorgeous Korean palaces in relative isolation (it was really hot, so tourists were probably sticking to indoor adventures), I was curios to visit Jogyesa, just for something visually different. I entered at the back of the complex, and all at once, the energy was palpably different. When visiting the palaces, I felt that I was viewing extremely large relics of the past, and aside from a few guards at the front dressed in period clothing, it was difficult to get a sense of the energy of the Joseon Dynasty. At Jogyesa I was immersed in a rich cacophony of the scents, sounds, and movement of a living tradition. As soon as I entered I passed a monk in a grey robe walking up the stairs to a large bell and drum tower. 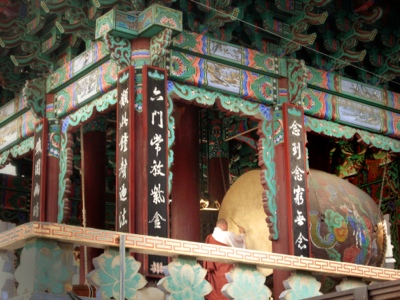 Within seconds, a rhythmic pulse beat through the plaza as chanting began in the large shrine room with three giant Buddhas. 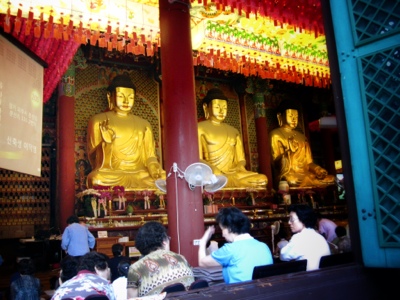 Instead of the quite meditative energy I feel in our Shrine Room at the Rubin, I was in the middle of an active site with practitioners moving in and out of service all around me. On the other end of the plaza there was a large stupa that practitioners circumnabulated around, and people felt free to pull up a folding chair to observe the service under the shade of a multi-colored canopy. 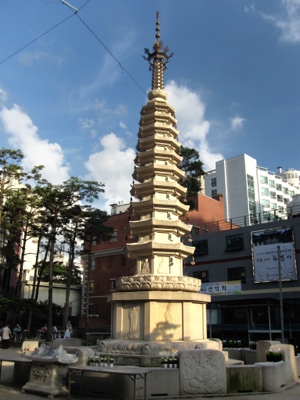 Around the entire building were painted depictions of the Twelve Noble Deeds of the Buddha, and many practitioners chose to prostrate in front of these depictions instead of the shrine. I particularly liked this rendition of Queen Maya and the Buddha taking his first steps. 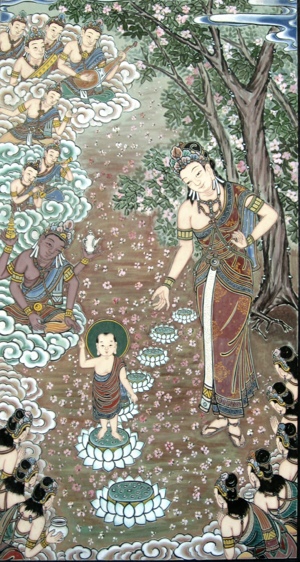 Time Out Seoul recommends a few other Buddhist spots in and around Seoul, and you can even stay at Jogyesa. Overall I found the entire experience quite moving because it happened smack in the middle of a bustling city. The site was a small oasis that blended the sacred with the urban in Seoul.

This entry was posted in Himalayan Art, Museums, Uncategorized. Bookmark the permalink.

One Response to A Visit to Jogyesa Buddhist Temple in Seoul, South Korea